Adelaide Anne Proctor (not to be confused with Adelaide Pollard) was born in London in 1825, the daughter of well-known writer, Brian Proctor, also known as Barry Cornwall. She was immersed in writing and lived in the company of writers including Charles Lamb, Charles Dickens, William Wordsworth, the Rossettis, William Thackeray and William Hazlitt.   While a child, she learned French, Italian and German, and she read extensively, all while being primarily self-taught.  As a teenager, her poems were published in Charles Dickens’s periodicals.  She submitted the poems under a pseudonym so that Dickens would choose to publish them based on their merit rather than out of friendship.  He didn’t learn of the ruse until much later.  In 1851, she converted to Roman Catholicism and then became an activist for feminist causes.  She helped found The English Woman’s Journal with the mission of urging women to become professionals in the workforce, and the Society for the Promotion of the Employment of Women.  She published poetry to benefit a Catholic Night Refuge for Women and Children in East London.  She never married, but did have an intense relationship with Matilda Hays, a cross-dressing  novelist and translator of George Sand (Amantine Dupin).  That relationship in Victorian England would of course, have been simply assumed to be a strong but unusual friendship, though some have suggested they had a lesbian relationship.  Adelaide died of tuberculosis in 1864. Dickens ascribed her early death to her exhaustion from her many philanthropic activities, from visiting the sick, teaching, helping the homeless and working for women’s issues.

She was very popular in her time and was Queen Victoria’s favorite poet. Adelaide was reputed to have sold more poetry in Victorian England than anyone other than Tennyson. Her poetry was often esteemed for its direct plainness.  Many of her poems were made into hymns. The apex of her inclusion in hymnals was in 1930.  One of her hymns was “My God, I Thank Thee” which still is found in some current hymnals. It deals with thankfulness in times of trial.  Bishop Bickersteth said it was most useful for the visitation of the sick.  But today, her most enduring poem would be “A Lost Chord” now known as “The Lost Chord”, which Arthur Sullivan of Gilbert and Sullivan fame set to music.  It first appeared in The English Woman’s Journal, mentioned above.  Have you ever experienced the paradox of an unexpected and fleeting “ah-ha” moment of eternity?  That brief moment when the divine eternal and infinite come together to illumine the soul, and yet that strange warmth and light doesn’t seem to last in time?  It disappears as quickly as that one lost chord divine played on the soul.  Only in Heaven shall she hear that grand Amen again.   Thus Adelaide expressed her own “ah-ha” moment.  The song was an immediate success.  Enrico Caruso sang it at the Metropolitan Opera House on April 1912 at a benefit concert for families of the Titanic victims.  He recorded the song for the Victor Talking Machine Company the same day and that performance can be heard on YouTube today. 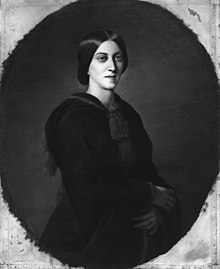